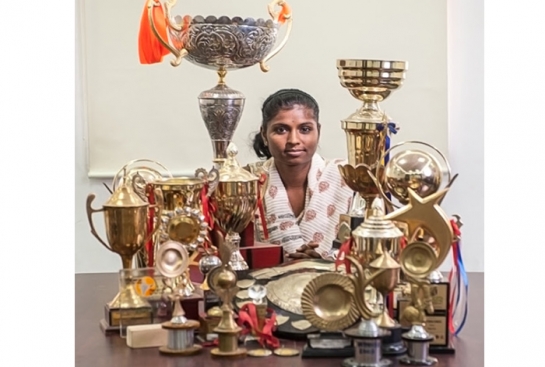 "I, Parvati Pujari, am a National Junior Trainer with Magic Bus in Mumbai. My struggle to reach where I am today is a story worth sharing.

I was born on 16th August 1990 at Bhabha Hospital in Mumbai. This was a first for my mother – her three first children, my elder sisters, had all been born in the shanties she lived in at the time. I was the first one to be born in a hospital.

My father worked on a construction site as a mason, and my mother looked after me and my six siblings. We didn’t have a home to call of our own. Mostly we stayed in shanty housing in the different construction sites where my father would be employed. After my youngest sister was born, we were nine members in the family and it was getting impossible for us to survive on just one income. So my mother also started working for a living. During that time my father was a construction labourer in a huge upcoming complex named Phoenix Mills in Lower Parel. My eldest sister never went to school, she was in charge while my parents worked.

My parents did not really think education was important, not when getting the next meal was of topmost priority, so none of my elder sisters went to school. A small NGO named Sunbeam taught me basics like alphabets and numbers in Hindi. We loved the teachers there because unlike at school, these volunteer teachers paid a lot of personal attention to each child and ensured that their concepts were clear. My curiosity and enthusiasm made me continue attending the classes. My younger sisters used to tag along too.

My eldest sister was married off at an early age of 12. If only she had been educated or received proper guidance as I did later in my life, she could have been saved from the clutches of this child marriage.

One day, Sunbeam took us on a three-day excursion organised by Magic Bus. It was a unique experience for me – I had never been on a picnic before. Those three days I still remember as absolute magic playing and learning with friends in a safe environment. It was here that I understood the meaning of bonding, of what it means to have friends. Later, Sunbeam helped me get an admission in the Lower Parel Municipal School where I completed my 3rd and 4th grades. I realised I could be an athlete when I received my first prize money of Rs. 21 in the annual sports day held in the school.

I was 9 years old when I started attending the Magic Bus weekly sessions, on Wednesdays. The sessions at Magic Bus made me relive the magic of the three-day excursion – we were all playing, learning, sharing and caring. Over the years, we learnt complex things like communication skills and teamwork, and also simple things like hand-washing, which keeps germs away.

Because of my skills I was given specialised training. I was just 10 then. I used to travel alone from lower Parel to the park in buses. This training helped me enhance my skills in sports later. By then I was also becoming an avid footballer.

When I was in 9th grade, my parents refused to let me pursue my studies any further. They felt it was my age to be married. My elder sisters had been married at the age of 12, 13 and 17 respectively.

After marriage all three of them settled in different villages. I did not want to end up like them, bound to the home in a village, so I decided to fight for what I believed in. My father complained of the burden that my education had caused him; he said because of the expenditure on my education, he did not have enough money to feed my younger sisters. After a whole two months of resistance, my parents let me continue my education.

I finished my 10th grade and my family began to pressurize me for marriage again. My mentors from Magic Bus spoke to my parents and offered me the job with Magic Bus. Magic Bus gave me a fellowship and paid me a stipend of Rs. 2500 per month. I was 15 and I was thrilled beyond belief. I used my income to pay for my college tuition and support my family. I worked from 9 am to 5 pm and enrolled myself in a junior night college where I completed my 12th grade.

I had done all my schooling in a Hindi medium school so when I joined college, it was a big challenge for me to cope with the English-language classes. Most of my friends would attend coaching classes but I did not have any time as I was working during the day.

I received my board results while I was at a refresher training camp with Magic Bus. I had managed to score a 59% in my Boards and I was satisfied. My parents were proud of me. By the time I came back from the camp, the admissions in all the colleges were closed. I decided to test my luck and visited Siddharth College where I got admission on the basis of sports quota for a Bachelors degree in Commerce. During the same time, I got selected as a National level Rugby player.

Also, I started playing football for various clubs like Magic Bus Football Club and Body Line Club. I stood first in an essay writing competition held by Laadli, an organisation that worked for the welfare of women.

While I was in my second year of under graduation, I was awarded with the “Active Woman in Sports” award with prize money of Rs. 15,000 from my college. Magic Bus promoted me to the Training and Accreditation team. In my 3 years of college, not once has the championship cup gone to any other college in inter-collegiate sports tournaments.

It was during this time that I made my first trip abroad to London with Matthew Sir, the founder of Magic Bus for a fundraising program. It was a memorable experience, telling everyone how I had missed the life of a poverty-stricken woman by a whisper, and how their support can make sure girls like me don’t grow up to be uneducated mothers. I also got the opportunity to attend the Julie Foudy Leadership program for football training during the same time.

Right now, I am awaiting my final semester results. I am considering doing a sports management degree . My parents are still coaxing me to get married while I work relentlessly to fulfill my goals. For me, accepting responsibility for my life, knowing it is only me who can get me where I want to be has helped overcome my challenges."