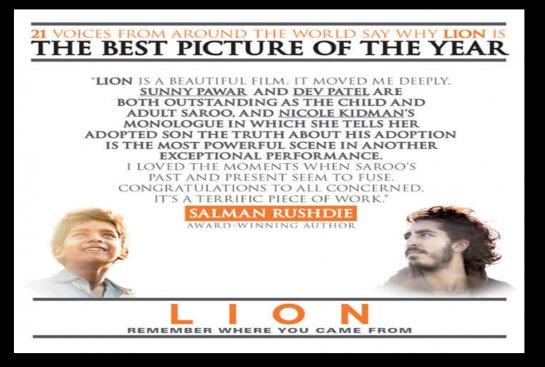 Dev Patel-Nicole Kidman starrer LION is based on the hard-hitting, real-life story of Saroo Brierley. Ever since its release, the movie has won countless hearts, nominations and awards. It is only a matter of time before it releases in India. On 24th of February this month, we will finally get to see what the world is raving about

A lesser-known fact about this film is that the makers are also leading a social impact initiative through their #LionHeart campaign. Magic Bus is proud to be one of the charity partners of LION.

Don’t believe us? Here’s what some of our heroes have to say about this film.

“Lion is a beautiful film. It moved me deeply. Sunny Pawar and Dev Patel are both outstanding as the child and Adult Saroo, and Nicole Kidman’s monologue in which she tells her adopted son the truth about his adoption is the most powerful scene in another exceptional performance. I loved the moments when Saroo’s past and present seem to fuse. Congratulations to all concerned. It’s a terrific piece of work.” – Salman Rushdie, award-winning author

“Lion is the most real, moving, bonding and universal story I have ever seen on film. And it’s a special gift now that we are being told to isolate ourselves and pretend we are not all passengers on space ship Earth.” – Gloria Steinem, writer and activist

“As a refugee, an immigrant, and a mother, LION resonated deeply with me. It is a remarkable film and testament to the indomitable human spirit.” – Madeleine Albright, Former Secretary of State.

“Lion is a profoundly beautiful testament to the power of finding and understanding your identity. People from all backgrounds and all walks of life will be moved by this universal story.” – Chad Griffin, President of Human Rights Campaign, the largest national LGBT organization

“In a world that seems to be broken apart by divisiveness, LION roars with the kind of hope we are looking for.” – Global Citizen

“Lion is an inspirational movie, a true story of joy and ope in adversity. Beautifully shot and directed, it has moved audiences around the world.” – Lionel Barber, Editor, Financial Times

“Lion takes you on an emotional, visceral journey. It’ll give you another good reason to believe in the magic of humanity.” – Andrew Ross Sorokin, New York Times Columnist/Editor, Co-anchor of CNBC’s Squawk Box.

“When a powerful story is told with emotion, beauty, pain and love, it can transcend geographies and self-interest. This is what Lion has accomplished and why it is an incredible tool that is creating impact across the globe. May it guide the human desire to do more in a disparate world” – Justin Reeves, Executive Director of Magic Bus USA

“In Lion, the human heart roars, pulses, and quivers in the search for what really matters.” – Dr. Oz

“Each night before my match I have my team come for dinner and movie night. We watched Lion before the final of the Australian Open - what an incredible movie.  It’s one of the most emotional and amazing films I’ve ever seen. It has my vote.” – Roger Federer

Don’t wait. Get your free pass to a private screening of the movie on the 22nd of February in Mumbai.Participate by clicking on this link: http://bit.ly/LIONscreenin