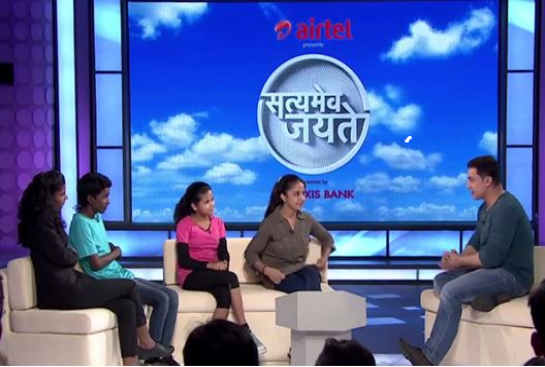 Since the last 15 years, Magic Bus has taken a sport-based curriculum to help underprivileged children and youth break out of poverty.

Sports is usually associated with action, energy, strength, fitness, and excitement. Whether it's your favourite pastime or hobby, whether you are a sports person, or, simply a viewer, these words pop up in our mind when we speak of sports.

Can sports be an answer to poverty? Can sports ensure gender equality? Can it also bring about positive behavioural change?

The third season of Satyamev Jayate opened with exploring the power of sports in scripting change in people's lives. Host Aamir Khan began by reiterating the unexplored potential of sports and requested teachers and principals to give it equal importance in the curriculum. A series of interviews with people in different age groups followed, with each story revealing the tremendous potential of sports in bringing about change.

Magic Bus' interesting journey of pioneering a sports-based approach to work with poor children and youth was a major segment in the show. Four Magic Bus children, Parvati Pujari, Vijay Gupta, Ritu Pawa and Gulafsha Khan shared their stories of struggle and hope, and how it was Magic Bus' activity-based curriculum that encouraged them to get out of their situation and get educated, instilled in them a sense of confidence and discipline, and helped them transcend the deeply-gendered public-private spaces.

Parvati and Gulafsha are the first graduate within their family and community, and Parvati being the eldest at 21 in the group of four is now pursuing a professional career, and is a global fundraiser for children living in poverty. Despite their humble beginnings, each of them are leaders in their own right.

Read the stories of Parvati, Gulafsha, and Ritu.

Their confidence and fearlessness impressed Aamir and viewers alike. Their stories inspired admiration.

Next, Aamir welcomed Matthew Spacie, Founder and Executive Chairman of Magic Bus, to explain the thought behind the approach and it's early days. Matthew went back to the days he used to play rugby at the posh Bombay Gymkhana. A few boys from the adjoining Fashion Street were in charge of parking the cars of rugby players who played at the Gymkhana. Their interest in the game was evident but they could only watch it from the sidelines. One day Matthew thought of teaching them rugby.

During their training, he saw some remarkable changes in them - they had become unusually disciplined and punctual, and would try to cooperate with each other, and not fight. He also discovered that sports unified them all; in the field they were simply players and not members of different religious communities. Here was an answer to a whole host of problems plaguing Indian society!

Matthew connected the young boys to avenues of employment since most of them were from extremely poor households. But, none of them managed to hold onto their jobs. This made him acutely aware of the importance of sports early on, so that, children from poorer households could learn crucial life skills that would help them get better employment and opportunities.

At present, Magic Bus brings the transforming power of sports in the lives of 250,000 children within 20 states across India. The success of its approach is evident in the fact that 90 percent of children associated with Magic Bus are first-generation learners. 10,000 child and youth leaders in the programme work conscientiously to bring about change in their respective communities.