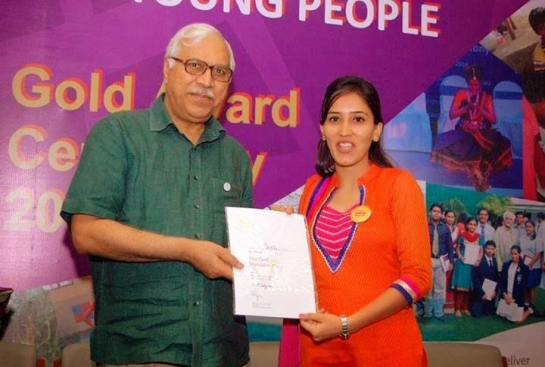 "The best and most beautiful things in the world cannot be seen or even touched - they must be felt with the heart." - Helen Keller

Deepika is 23 years old and lives with her 3 elder brothers and parents in New Delhi, India. She has graduated from Delhi University Khasa College and is working as an Assistant Manager for the State's Training programme at Magic Bus India Foundation. Her role involves assisting with the training of Magic Bus' field staff who deliver its programme in the field. Prior to this recent promotion Deepika was working as a Magic Bus Training and Monitoring Officer.

Deepika has had an interest in sport from her early childhood and this interest grew into sports excellence in the game of hockey. She has been participating in National School Games Championships and State University Championships; and has won trophies and medals through her representations.

The turning point was on 26th Jan 2008 when she was attending her college in the city of Delhi. She had just been asked for an interview by a local newspaper (NDP) for an article which was titled 'UPCOMING CHAMPIONS IN DELHI UNIVERSITY, CHAK DE GENERATION'. The article highlighted the achievements of Deepika and her college hockey team mates and recognised them for their 'wonderful achievements', and as 'emerging stars of the campus'. She remembered herself thinking that what had happened to her was the best thing in the world!

The love for the game of hockey was in her. She was attracted to hockey for its good reputation - as a clean and healthy sport, and if played in the right spirit with the right guidance then it could contribute to positive social integration.

Her dream was to develop hockey in India, especially at the grassroots level so that the country could be represented on a global level by both men and women. To achieve this, she feels that the sport needs appropriate exposure; a new coaching philosophy; more playing spaces and job opportunities for hockey players in India. She says “The game of hockey should always be like the shoes of children. Perfectly tailored and adapted to them."

More about The International Award for Young People

The IAYP is divided into 5 sections:

SERVICE:
• To learn how to provide a useful service to others

Deepika has worked extensively with underprivileged children and youth in India through Magic Bus, and helped them to progress with their education and gain employment. She has also referred youth she has worked with for jobs and vocational courses. She is a strong role model for her younger peers.

ADVENTUROUS JOURNEY:
• To encourage a spirit of adventure and discovery

Deepika has participated in adventure activities such as climbing, rappelling, trekking in a remote part of Mahrashtra.

SKILLS:
• To improve on your skills: either a new skill or an existing one

Deepika has developed basic IT skills.

PHYSICAL RECREATION:
• To encourage and participate in physical recreation and improvement of performance

Deepika has played hockey at a competitive level; she has competed in the State Women's Championship, represented Delhi University at Inter-University tournaments, taken part in the Delhi Soft Hockey Championship and has participated in the National Games three times at Secondary School level.

RESIDENTIAL PROJECT:
• To broaden one's experience through interaction with others in an unfamiliar residential setting with unfamiliar people through a purposeful activity.

Deepika has imparted sports for development and youth development training to peer educators at Plan India in Jharkhand.

To qualify for a IAYP Award one needs to complete the requirements of 4 different sections which are measured in terms of Progress, Proficiency and Standard of effort. Participants also have to maintain an IAYP record book in which they have to highlight all their work in each section, qualified by an authorised signatory. For the Gold category, 18 months worth of entries are required for all sections. Deepika completed all five sections and won the IAYP Gold Award.

Our heartiest congratulations to Deepika and wish her the best for the future!