Out of Wed-lock: Savitri’s story of escaping child marriage 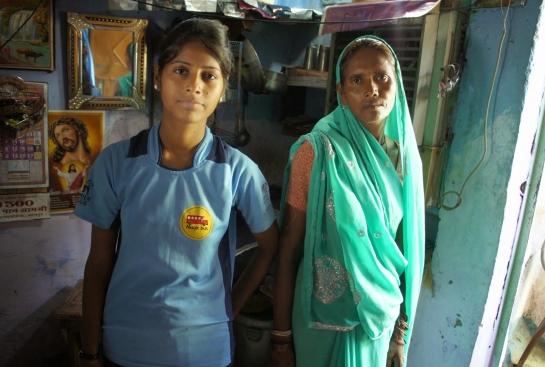 “I was just six months old when my father past away. I have seen my mother toil everyday to make ends meet”, says Savitri. 17-year-old Savitri lives in the by-lanes of Timarpur in north Delhi. Timarpur is the first government colony set up in independent India.  A rented one-bedroom house in a makeshift settlement narrates the sordid economic plight of her family.

Savitri is a Community Youth Leader with Magic Bus from Timarpur. She has six siblings: five sisters and a brother. She comes from a family wherein child marriage is a normative practice. Two of her elder sisters were married at 15. They are both mothers and ‘happily’ married."I could have done anything to avoid this fate", says a vocally horrified Savitri.

Her brother is employed with a private company in New Delhi. But, he does not financially support his mother. Savitri’s mother is a daily wage labourer with an average monthly income of Rs 5000/-. "My mother works very long and very hard. I want to study well and find a decent job for myself so that I can relieve my mother off her daily rut", shares Savitri.

Savitri vividly remembers the first time when Magic Bus came to her neighborhood. Arun, the Community Youth Leader, took a recee of Timarpur and spoke to the parents about Magic Bus. But, it was not easy to win support – there was a lot of resistance especially from parents who thought it was unsafe and morally unsavory to see their daughters stepping out of home and playing with boys.

Their fears were strengthened by the fact that incidences of theft, physical and sexual assault was too common at Timarpur. "It was a difficult locality to work in. It took lots of meetings to convince parents to send their children for sessions", shares Arun.

The day when parents started sending their girls for Magic Bus sessions was a breakthrough moment in the community.

When Arun met Savitri for the first time she was visibly worried. "Her mother was searching for a groom for her. She was just 14 years then", he recollects. She begged Arun to convince her mother against this early marriage. When Arun spoke with her mother, Savitri's mother responded, "Beta (son), we can barely make ends meet. Education is not meant for us. I will marry her off and then let her new family decide if they want her to continue studying further or not’.

After weeks of regular interactions and meetings with Savitri’s mother, she agreed to send Savitri for Magic Bus sessions on a temporary basis. Savitri’s happiness knew no bounds. She knew that she could thwart all attempts to convince her to get married once she had stepped out of home.

As a Community Youth Leader, Savitri, encourages young girls and boys to join the Magic Bus programme. "Magic Bus gave me the confidence to stand up for myself and dismiss the idea of child marriage", she says with pride. She does not want girls to compromise on their dreams and helps them find a purpose to their lives.

“We are not born to be someone else’s wife!” she says emphatically.

Savitri is young and determined. She wants to become the voice of change for her community. She aspires to become a police officer, sensitive to the cause of women and girls.