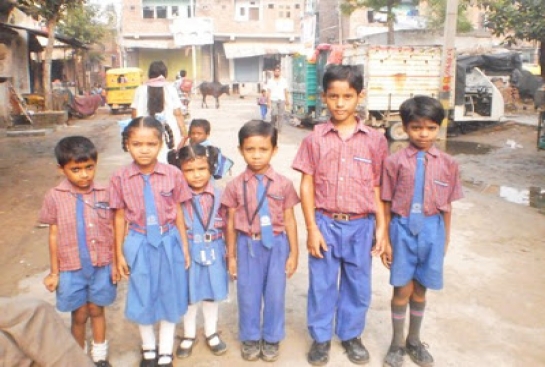 While successful enrolment of 83 kids from a resettlement colony in North Delhi into a Government school makes Magic Bus proud, Deepika Srivastava takes extra joy in posting her first post on the blog: School Chalein Hum (Let's Go To School)

Education is simply the soul of a society as it passes from one generation to another - GK Chesterson. More often, a strong desire to change the world strikes many of us. But, only seldom does it as an effective action-oriented move.

In an attempt to build a better society, we took forward an initiative in the form of enrolling some kids in one of the schools of Bhalaswa. Being a resettlement colony, Bhalaswa has been thriving abode to people since 2000. The colony is a blend of migrants from central and southern parts of Delhi. However, this diversity is entangled in the clutches of rampant poverty and deteriorating living conditions as many of them have lost their source of income and houses due to shifting. Thus, day to day life has become a struggle for the people.

The degrading atmosphere of the area was evidently seen influencing the mindset of children. To our dismay, children were spotted doing rag picking and wandering aimlessly and not going to school as school was far from the colony. People not sending their kids to school became a trend due to various reasons.

Challenging this, the North Delhi team worked splendidly in generating the much-needed awareness among people, eventually succeeding at motivating them about the importance of education. The task, no doubt, was mighty challenging, but then, where there is a will, there is a way.

A special mention of TMO Santosh would be evident as he along with his team of youth mentors strived hard in enrolling the kids in school after a detailed research. Team Magic Bus with their perseverance and true spirit, managed to enroll 83 kids in school from nursery to grade 11, including 18 child labors and 30 girls.

It was heartening to receive an overwhelming positive response from people who were way too ignorant sometime back. The drive has such a strong impact on children and youth that a boy named Guddu, with an intense dream of pursuing higher studies, approached a CSC and was helped in getting admission in the one of the correspondence courses of Delhi University. Indeed Magic Bus is magical.

The drive was instituted in the month of April followed by two months summer vacation where the MB team verified that all 83 kids would rejoin the school without any drop out. Thus, it was a matter of great pride and ecstasy that no one dropped out.

Yet another feather was added on the MB cap where education has finally set its mark on minds and excitement to learn more clearly shines. This whole experience forced me to recall the saying that I truly believe: Tell me and I'll forget; show me, and I may not remember; involve me, and I'll understand.