She finds her feet 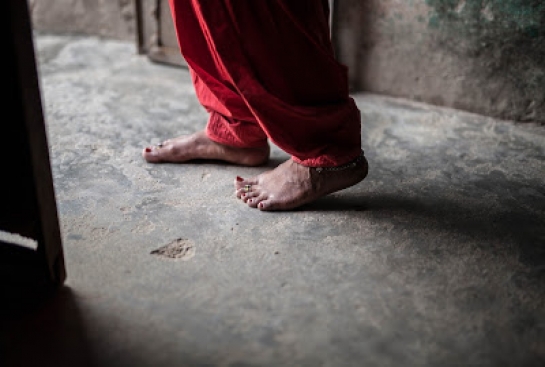 After years of domestic abuse, this 29-year-old not only decides to break out of it but also finds a way to be independent while fighting those mindsets that subjugate women in all societies.

“I did not know I could be anything apart from a daily wager, just like my parents,” says 29-year-old Sashwati (name changed to protect identity) At Ambadi village in rural Bhandara district of Maharashtra, almost every other person is an agricultural worker. “Some have land. The majority don’t. The ones who don’t have land work for those who have,” she explains.

Sashwati went to school. She completed 12th standard and was married immediately after. “It did not matter that I finished my secondary schooling. I was not allowed to go to college because it was at a distance. There is a lot of fear about young, unmarried girls stepping out of their homes. And so, I was married off at 21,” she says with a hint of sarcasm in her voice. “My parents thought that marriage would protect me and help me have a small world of my own. Little did any of us that it would actually push me towards my own destruction,” her voice trails off and she can continue no longer.

“It was painful. I thought I will get a lot of love and respect after marriage. I was let down repeatedly. I was abused day after day. Suddenly home was no longer what I expected it to be. I was scared, stunned that this could happen to me,” her voice carries the weight of pain and betrayal. Sashwati never shared a word about the abuse and beatings at home. She never told her sisters or her brothers that she was unhappy. Her in-laws kept torturing her for dowry. “I almost started living with the pain and humiliation. I was unhappy but I knew there was no way out,” she accepts.

After the birth of her first child, she hoped to take refuge in the new relationship. She also hoped that her husband would change his behaviour. But it was not to be so. The violence continued and grew worse since her in-laws knew she could be threatened with her son. “When my son was 3 years old, they beat me up so badly that I had blood streaming down my head. My son saw it and was scared of even approaching me. That was the moment I realised I am not in this alone. He would be suffering with me. I picked up my child and went to the nearest police station to file a complaint against my husband and in- laws. That night, I went to live with my sister. I told her the entire story and spoke to my brother. My husband and I were called to the Nagpur police station the next week. In the presence of the police and my brothers, he threatened to kill me if I went ahead with the complaint,” she narrates.

Sashwati refused to give in to her husband’s threats. “After a point, I stopped caring about what he could do to me. I had to make him stop somehow. I knew I had to live for my son.” She returned home and became a target of gossip by her neighbours. Even her sisters-in-law appeared hostile when they learnt she would never go back to her husband.

“They were afraid that I would claim my share of the property. I had no such plans. My parents are so poor that they have barely anything to stake my claim on,” she shares with a laugh. Isolated in her own home, Sashwati decided to work twice as hard as before. “To forget my past and to earn so that no one would blame me for being a burden on my brothers,” she sighs.

She went back to doing what her parents did – long and hard hours of sowing and harvesting in the fields, under the merciless sun, for Rs 100 a day.

It was around this time that Vaishali, a Magic Bus staff, came to visit her house. She was enrolling children on the Magic Bus programme and asked if Sashwati’s niece would like to join them for a session. Her brother wasn’t willing to send his daughter out to play with people he barely knew. Vaishali assured him that it would be safe for his daughter and invited him to come for a session too. Sashwati appealed to her brother to let her niece participate and promised she would watch over.

During the two hours that she watched her niece play with 24 other young children, Sashwati momentarily forgot the nightmarish life she had lived in the last several years.“I laughed. I cheered. I listened. I realised how little of this I did in the last eight years of my life,” she shares.

Her interest in the sessions and about those who conducted them (the Community Youth Leaders or CYLs) brought her to Priyanka Patil, another staff in charge of mentoring those who deliver these sessions. Priyanka was looking to involve more enthusiastic Community Youth Leaders, as the number of children attending the sessions grew each month. Sashwati volunteered. When Priyanka told her about a five-day-long offsite for the training of CYLs, she was perplexed. She shared with her family and they reminded her that she was a mother of a five-year-old. “You can’t go just like that. Who will take care of your son?” they asked her. Sashwati prevailed with them. “It was an opportunity for me to do something that I wanted to. I did not want to let go of it,” she says.

Her family supported her decision grudgingly; and Sashwati found herself on board her first journey to a place far away from home, with people who were as similar as they were different. “It was all so new and exciting,” her voice quivers with excitement.

Things started falling into place faster than she had assumed. Months after she started her work as a Community Youth Leader, she was spotted by the Programme Manager, delivering a session to children. “Her confidence and enthusiasm drew our attention,” says Prashant, recollecting the first time he saw her. Later he came to know all about Sashwati. “They knew my financial problems. They were happy with my work and so they offered me a job: I could be a Youth Mentor at Magic Bus!” she beams.

“As young girls, we never had the freedom to step outside our homes. We moved between school and home. We were asked not to loiter, not to be loud. It was almost as if we learnt to remain unheard. Magic Bus is breaking this mindset and I am happy to be doing that for a living. I understand the value of helping each girl to grow up to be resilient and independent,” her resolute words linger on as she takes a brief pause. “More than anything, this job has helped me win back my self-esteem. I am no longer destined to live anonymously. I have a name within my community. I am not the subject of pity or derision. I am loved by my children and more by my son. He says he wants to be a District Magistrate one day and not let me work at all,” she laughs.

“I am 29 years old but my life seems to have just begun,” she sound buoyed with newfound energy and hope.

She was quiet for the longest time.
Till a point when,
Her unsaid words gathered and
poured
Out.
Washing out all:

A clean slate, once again.