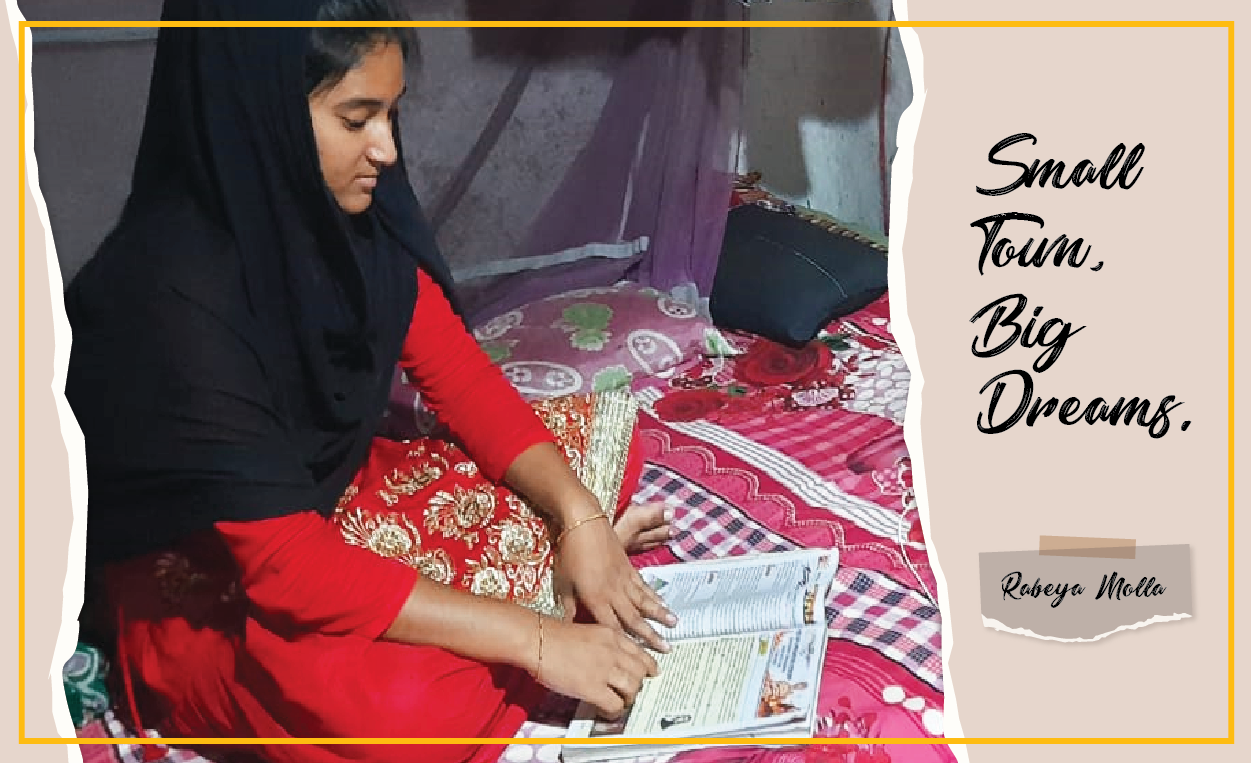 Rabeya Molla is one of the many young girls from Jayanagar, who has faced countless struggles, especially during the pandemic. While her story is similar to that of many other young girls in her community, the ending is quite different…

Young girls from marginalised communities are often married off before they reach the 8th standard. For parents, marrying off their daughters means one less mouth to feed, while for in-laws it’s another pair of hands to work. For girls from Jayanagar, West Bengal, the situation is no different.

Jayanagar is a small town barely two hours away from Kolkata, which seems deserted at first glance. Most young girls here do not even dare to dream of having their own ambitions, let alone studying beyond the 8th standard.

However, 17-year-old Rabeya Molla bravely dreamed big. A bright student with innovative ideas and a hunger to learn new things, Rabeya is the eldest of four siblings from a severely marginalised family.

Her father who works as an agricultural labourer, earns a mere  Rs. 250 per day. While this is barely enough for the family of six even on a good day, their situation only worsened during the pandemic as Rabeya’s father lost his job and the family plunged deep into financial distress.

With schools transitioning to the virtual mode, Rabeya and her siblings could no longer attend school. Her family was unable to afford a smartphone or an internet connection, and Rabeya was terrified that it was the end of her education and ambitions of becoming a doctor. Like the fate of many of her friends, she was sure that she too, would be married off soon.

A Covid-19 impact study conducted by Magic Bus found that the pandemic negatively affected more girls than boys, as girls are generally more expected to lend a hand in household chores. Sadly, this often means that girls supporting household chores do not return to school. [2]

Besides this, one of the significant reasons why adolescent girls drop out of school is because of menstrual pain and the lack of hygiene facilities in schools. Despite the hardships, most girls want to attend school and complete their graduation.

Like many others during the lockdown, Rabeya joined her mother in doing odd jobs for a nominal income. Unfortunately, their pay was barely sufficient to ensure a square meal for the family. Times were hard but even through the chaos, she devotedly continued to teach her younger siblings at home.

Udaan, a project conceived by Magic Bus and Tata Motors Finance, works in marginalised communities across India to empower adolescent girls like Rabeya, between the age of 12 to 17 years. The programme ensures that young girls complete their secondary school education and transition into a better future. In doing so, it successfully staves off destabilisers like child labour, child marriage and gender discrimination.

As the first step of the intervention, our Magic Bus team reached out to Rabeya’s family during a common mobilisation drive. Initially, her parents were sceptical about enrolling her in the programme as they did not understand the benefits and assumed it would be paid. Thanks to the intervention of our on-ground team, the family changed their mind and agreed to enrol her.

Through the Magic Bus programme, Rabeya understood the significance of being resilient, voicing out opinions, being a team player to reach a common goal, managing funds better, and the importance of education and self-efficacy which changed her life largely. Refusing to let her life be defined by what she didn’t have, Rabeya was ready to go through any hardships to achieve her dreams. She chose to work hard, be valourous and take on life with a ‘never say never’ attitude.

She was also offered an education scholarship from Tata Motor Finance through which she was able to buy school supplies like notebooks and textbooks, which her family could not afford earlier. Thanks to the programme, she was enrolled in a tutoring institute that helped her plan her studies in alignment with other daily responsibilities.

When her final examination results came in, no one could believe their eyes. She had not only passed but scored an impressive 86%! Rabeya is the first girl in her community to pass the 10th standard, that too with flying colours. She was over the moon and thanked the Magic Bus team who helped plan her schedule, Tata Motor Finance for the scholarship and her parents for believing in her.

Today, Rabeya is an inspiration for many other girls and boys in her community.