The way to the classroom: Phoolwanti’s story from Bihar 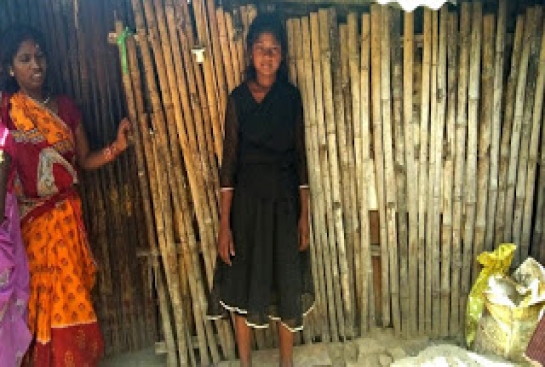 “Bihar has nearly 2.2 million Musahars, according to the state Mahadalit Commission’s interim report. Community activists, however, claim that the population of Musahars cannot be fewer than three million in Bihar. About 96.3 percent of them are landless and 92.5 percent work as farm labour. Literacy rates in this community, which upper caste Hindus still consider untouchable, is only 9.8 percent; the lowest among Dalits in the country.” The Quint, The Musahar Community in Bihar struggles to educate its children, 23 January 2017

12-year-old Phoolwanti lives with her family in Lohanipur slum cluster in Bihar. Her family is a small one, comprising her mother and her younger sister. “My elder sisters are married and have children my age. They were married at my age,” she says, adding, “My entire family is into rag-picking. My father was a rag picker. He died of tuberculosis. When he fell ill and could not work anymore, he was less concerned about recovering than about getting my elder sisters married. I think, the tension and debts killed him,” her voice falters. “I cried a lot when father died. Mother tried her best to save him. She took him to the hospital. She worked extra hours to pay for the medicine. All of us ate one meal a day to save some money for his treatment. But we could not save him,” she sighs.

Phoolwanti lost her younger brother to a disease she “knows nothing about. I simply know he would lay curled up in the corner of our house, clutching his stomach in deep agony.” Her mother works as a rag picker. “Her day starts at 6 in the morning. I hear the dragging sound of her sack on the floor and know it is time to get up. She works the entire day, collecting scrap, walking long, long hours in the sun,” her voice appears strained recounting a day in the life of her mother.

For Phoolwanti, the squalor of her surroundings is the only reality she is used to. “We live on garbage. We drink dirty water. We boil our water sometimes. Most of the times there is not enough money to buy fuel to light the hearth. On such days, we do not think if the water is dirty enough to drink.”

Lohanipur is home to a large number of Musahars – one of the most marginalized castes in India who are routinely forced to live in subhuman conditions and face rampant discrimination. In the struggle to put together two meals a day, most of these families do not send their children to school. Children, like Phoolwanti, either accompany their mothers at work or stay at home to finish household chores and take care of younger siblings. “None of my sisters went to school. My parents did not send me to school. Instead I went with my mother to collect and sell scrap every day. On days I went to work, mother made 300 rupees a day. Without me, she would only get 200 rupees a day,” she explains.

Phoolwanti had no time for school. But she wanted to go to school. She imagined how school would look like every single day she set out to work with her mother.

Prior to beginning sessions in this community, Magic Bus staff first reached out to enroll parents into the programme. Phoolwanti’s mother agreed to send her child for the sessions and volunteered to participate in the parents’ meetings as well. But when both of them failed to turn up on multiple ocassions, Magic Bus staff, Ritesh decided to pay them a visit. Phoolwanti’s mother shared her plight with him. “I can’t send her to school. If she goes to school how would I feed them? How will I return the money I had loaned to marry off her elder sisters?” she asked. Ritesh reasoned with her, calmly. But Phoolwanti’s mother remained unconvinced.

What followed was a series of follow up meetings with Ritesh visiting Phoolwanti’s mother to convince her to send her daughter to school. In those meetings, he tried to explain how early marriage and lack of education have been some of the reasons behind their abject poverty. When he learnt that her mother was planning Phoolwanti’s marriage, he firmly explained how this would destroy her daughter’s future. “She will never be able to move out of this suffering if you marry her so young,” he said.

“To me, the best aspect of Magic Bus’ approach is involving youth from a community to work with children from the same community. This creates trust in the minds of parents. It was easier for me to convince Phoolwanti’s mother because she knows I belong to the same community and live in the neighbourhood,” says Ritesh who has been working in Lohanipur as a  Magic Bus Youth Mentor for the last one and half years.

“Ritesh bhaiya never gave up. It is because of him that my mother put me in a school and asked me to study instead of working,” says Phoolwanti. There were many times when pushed to starvation, her mother considered pulling her daughter out. But Ritesh always helped her reconsider.

Phoolwanti goes to school today. “I want to take my younger sister with me too. But every time I get her to the classroom, the teachers drive her away. She has to have her name registered to attend classes. Next year, I will get her name in the muster rolls,” she resolves. “I find English and Maithili difficult. I enjoy Hindi. There are so many stories. I love reading them,” she sounds excited “I want to be a teacher when I grow up. I see so many children not being able to go to school. I want to bring them to school. I want to tell their parents about my story and encourage them to support their children’s dreams. Just like my mother did. Just like Ritesh bhaiya did” ,she signs off.