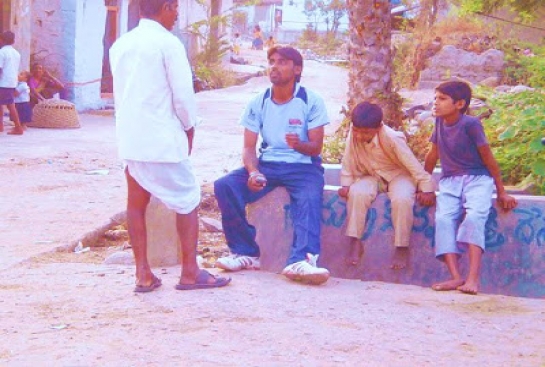 Saumya Bhasin and Shireen Saxena share a story from the rurals of Andhra Pradesh, India.

There could be nothing better than a pleasant, breezy morning to give you a headstart for the kind of work Magic Bus undertook on February 28 in Uttalloor, a village in Medak district of Andhra Pradesh. Although, a thickening cloud cover was present throughout our session, threatening to ‘dampen’ our jovial spirit anytime.

Soon after reaching our destination, we proceeded towards our work. With a vigilant eye, we went about hunting for a decent open field. Not finding anything to our satisfaction, we decided to make do with what was conveniently available, without wasting more time. Spotting a strip of land lying waste and barren, save the overwhelming growth of dried grass and a sporadic vegetation of weeds, we decided to use it for our session after getting the space cleared.

Next, we went from one household to another asking people to attend the community meeting scheduled for later that evening. It was a pleasant surprise to see most of the villagers enthusiastic regarding our proposal, when, on further enquiry from their side, we told them as to what the meeting will be about. Shyam, a farmer, seemed particularly keen on helping us through and even spoke to many villagers on our behalf in the local dialect even convinced a few to attend it.

In the interim, our team members set about preparing banners and posters on the importance of sports and education.

Immediately after completing this task, we started talking to the village children to have their views on education. It was interesting to observe how many children acknowledged the importance of Education and considered it to be their key to a better life. With the children, we proceeded with organizing a rally, making them hold the banners we made. Waving posters and shouting slogans and thereby changing the whole village atmosphere, we walked 6km within the village, spreading the message on Education.

After our rally, the community meeting took place in the evening. The place was seething with people as an unexpected 300 turned up. However, it went well with the Sarpanch and Panchayat members acceding to most of our proposals. The community leaders and village youth volunteered to knuckle down, clear the land and convert it into a befitting place to hold sessions. Together, we also chalked out extensive plans regarding the same. By setting up a slide show for the villagers, we succeeded in elucidating what Magic Bus plans to do in its forthcoming session. It was heartening to observe all eyes firmly riveted on the slide and some even overcoming their inhibitions to ask queries.

On the whole, I would say, a day’s visit to Uttalloor has been truly successful and productive. Sitting among the villagers, talking to them, listening to their grievances and making sincere efforts to address a few critical issues endemic to such neglected villages, is an experience which will go down the memory lane.