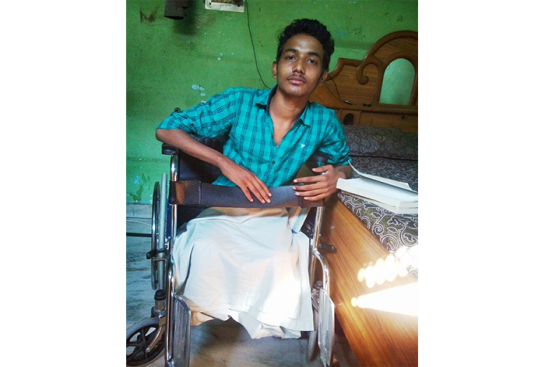 Shivam, 18, lay in his bed at Safdarjung Hospital surrounded by a stack of books. Time and again, he would flip through books as the medicines kept the pain away. A battle raged in his mind as he feverishly tried to remember facts and figures, afraid of the time when the medicines’ effect would no longer keep the pain at bay.

Not long ago, on a different occasion, he felt similarly embattled.

Shivam lost his father to an accident at the latter’s workplace, the construction site where he was a labourer. After his father’s death, the family plunged into a severe economic crisis. As the eldest son, Shivam decided to stop going to school and start working. “I could not stand to see my mother bearing the burden all on her own, working tirelessly in a wax-candle factory”, he recounts.

He didn’t get the time to act on his decision.

Magic Bus had just begun its sessions in Sultanpuri of north-west Delhi. The area, notorious for its high crime rates, was also home to Shivam and thousands of families like his. Shivam was introduced to Mamta, Magic Bus Youth Mentor (YM) as a bright child who needed guidance, both emotionally and academically. He volunteered to be a Community Youth Leader (CYL) and came to realize that his decision to drop out would not have helped his family in the long run.

“There are moments in your life when you need advice – if you get a good one your life goes on the right track. Thankfully, I found mentors in Magic Bus who showed me how wrong I was to think of discontinuing education”, he explains.

Just when everyone had their hopes pinned on Shivam’s ability to get a suitable job, situations changed. On his way from school, Shivam met with an accident as he tried to cross the hitherto familiar Nangloi railway line, to reach home. The steel of the buckle of his bag shone in the sun and blinded him to the oncoming train.

When he opened his eyes, he saw his family around his bed. He also noticed that he could no longer feel his legs. They had to be amputated.

“The physical pain overpowered the realisation that I could no longer walk on my own”, he shares.

But, with this came another challenge: Shivam’s school refused to let him appear for his higher secondary examinations. He was considered not “fit” enough to study further and write exams. Not even Mukesh, the Training and Monitoring Officer (TMO) at Magic Bus, or Shivam’s mother could persuade the school’s principal to change his mind. But, they didn’t give up.

Nor did Shivam; it was not the first time he had been embattled. TMO Mukesh and YM Mamta took the issue to the deputy director of education of Central Board for Secondary Education, Ms. Rashmi Gehlot. Ms. Gehlot appreciated the incessant help that Magic Bus was lending to Shivam and took his case seriously. She immediately contacted the principal and demanded an explanation. Shivam got his seat back.

“Shivam is a child prodigy. He is mentally solid. He has the strength to turn the worst situations in his life to his advantage”, says Mukesh proudly.

We’re often weakened by the enormity of problems facing us. We become doubtful of our abilities to make it through, afraid of failing, and skeptical of success. It’s then that we turn to people like Shivam - to inspire the strength of belief and the hope of courage.