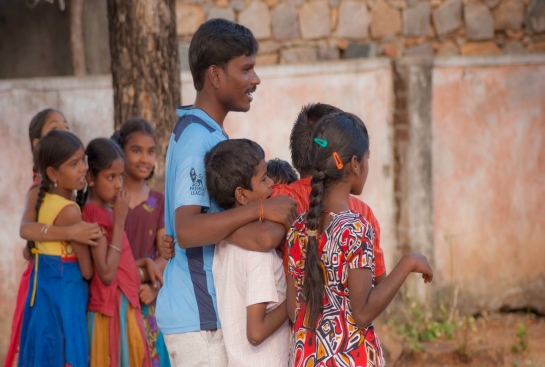 Ravinder, 22, found his calling when he saw children living in abject poverty in his neighbourhood at Kothwalpalle, Telangana. “Our terrible plight always bothered me. I felt I was wasting my time in school. I wanted to jump into community service as soon as I completed school, but my village and filial responsibilities prevented me for a long time”.

Ravinder’s family is among the economically marginalised families in Kothwalpalle. They own a road-side restaurant which earns them a bare-minimum sustenance. “People often saw me as the son who would sit at the restaurant and earn a living like my fore-fathers did. However, sitting aimlessly and managing business at the restaurant was hardly my ambition. I knew I had to work towards the betterment of my community”, he recounts. Ravinder’s anger against the nonchalance of the local administration towards the poor in his community was searing within him. He knew that till he had to find a platform to make their voices heard.

Magic Bus began its operations in the community from 2011.

However, it took almost a year to mobilize the community completely. Ravinder participated in the community meetings organised by Magic Bus to understand the programme but, was skeptical. He felt unsure of the sport-for-development curriculum.

“How could sport bring about a definitive change to a child’s life?” he would often wonder. However, after several deliberations, he was convinced by the intent of helping children break out of poverty; it resonated with his.

Ravinder joined Magic Bus as a Community Youth Leader in 2012 when he was 19 years of age. He was a key player in mobilising children in the community. He would participate in door-to-door enrollment drives, organise meetings with the parents and also help in improvising the curriculum to suit the ethos of Kothwalpalle. Magic Bus gave him all forms of support as he set out to relieve his community from the clutches of poverty.

“Magic Bus was my confidence booster. I felt its power when I started to see minor changes within my community. I could see young girls and boys were playing and learning together!” says Ravinder.

Politics was never his forte, yet, Magic Bus’s team of Community Youth Leaders in Kothwalpalle and Youth Mentor Laxman, encouraged him to stand for the elections of the Sarpanch(community leader) in the village. Ravinder was unsure at first but finally filed his nomination.

He didn’t know how to ask for votes but his goal was clear and singular: relieve the children in his community from excruciating poverty. “I can never thank Laxman enough for his unparalleled support throughout the election. He helped me draft my agenda and mobilize people for the polling day when I was away working with the children”, shares Ravinder.

But what worked was his immense popularity in his neighbourhood supported by the credibility of the work he had done with the children. With a thumping majority, he became one of the youngest Sarpanches of the state.

Ravinder is a youth moved with a vision of freeing his community from the clutches of poverty. He also symbolizes the immense potential that the youth of this country have in bringing about change.