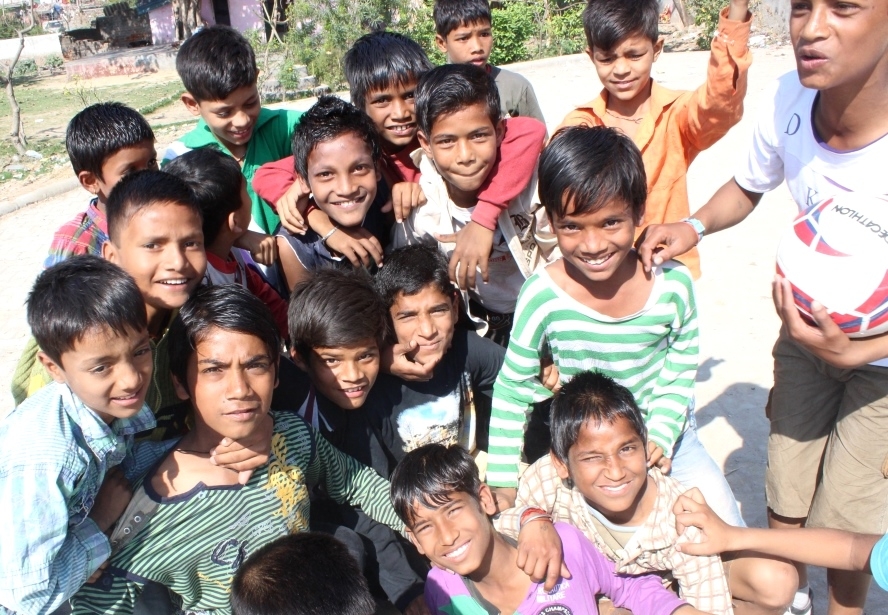 Magic Bus' work in this community is made possible with the support of our donor, Pritpal Gill

Block B in Bawana is a resettlement colony where the Government has relocated the people living in Sanjay Amar Colony slums in Pitampura and Metro Vihar. This colony was established about 8 years ago. Each family was given an 18 square metre plot, but no houses. Since residents are too poor to afford brick-and-mortar houses, they built themselves homes using tarpaulin sheets, flex banners from advertisements and other scrap material. Besides the obvious disadvantage of zero weather proofing, these materials are also highly combustible.

One of the major problems faced by this area are the frequent fires that erupt, burning whatever little possessions people manage to gather, to cinders. A foundation stepped in to build people pucca structures to live in, which substantially resolved the problem, but the new houses built do not have proper sanitation facilities. This forces the 1000-odd households to use the local Sulabh Sauchalaya (a public toilet facility) in the block. With a 5000-strong user base, the toilet is unhygienic, its' twice-a-day cleaning schedule inadequate.

The houses don't have any provision for plumbing, so people gather their drinking water from a water tank the local mosque provides. All through Delhi's 40 degrees plus summer, drinking water remains a major challenge for residents of Block B, Bawana.

On the bright side, the electricity supply is almost uninterrupted, given the area's proximity to an industrial area. All the houses as well as the few remaining jhuggis are provided with electric metres by the North Delhi Power Limited, a joint venture between Tata Power Company and the Government of NCT of Delhi.

The other major problem faced by the residents is the condition of the drainage system in the area. The sewers are located right in front of the main doors of the houses and are open. They are always clogged with trash which makes the dirty water flood the roads thereby filling the air with a powerful stench. The stagnant water is a breeding ground for mosquitoes and other insects and is a major health hazard. The MCD (Municipal Corporation of Delhi) cleaners come only once a week to clean and that doesn't really help the enormous amount of garbage that piles up.

What gives us hope is that 6 primary schools and 2 high schools dot the area, giving children access to formal education that should hopefully help them better their living conditions.

The people living in the area mostly work in the factories nearby that produce shoes, machine parts, paints and clothes. Illiteracy rates are high and the average monthly income of a family is around Rs 4000. Since most of the families live in homes they own, they save on rent, which is typically around Rs 1000 per month including charges for water and electricity.

Residents complain of high rates of burglaries. One of the main problems of the community is the dropout rate of kids in school. “The parents go away to work and the child is left behind alone. As there is no-one at home to monitor the child, he soon starts missing classes and finally drops out from school. This has been a growing trend in the area”, says Kushmi, the Magic Bus Youth Mentor for this area.

The Magic Bus Programme was started in Block B, Bawana in January 2013. About 50 kids attend these sessions.

In the beginning, the Magic Bus Programme faced a lot of animosity from the local community. Parents had questions about our unorthodox methodology that uses a combination of mentoring, sport for development and advocacy. Magic Bus staff and volunteers spent months in the area, at parent's meetings, door-to-door campaigns and organising demo sessions, to convince the elders that the initiative was one worth sending their children to.

Activities like a tour for the Community Youth Leaders to the National Science Centre and the Buddha Park in March 2013, a community rally on the importance of education and a drawing competition on education and the environment helps keep the community engaged with the impacts the Magic Bus programme is working to create.

Saddam belongs from a family of 6 people. His father is labourer with marginal income while his mother is a homemaker. Difficult conditions of life forced Saddam to drop out of school by the age of 14, when he had not even completed Class 8 (In India, education is free in Government school, upto Class 8).
When Magic Bus started work in Bawana, he was a boy to be feared – addicted to drugs, abusive and a fondness for disruptive behavior marked him out from others. There were times when Saddam would simply snatch the play equipment and run away.
The local Youth Mentor, Kushmi, decided that some direct action was necessary. Beside treating him with exactly the same respect as she did any of the other children, she also put him across to a professional councellor. Who worked not just with Saddam but with his family too.

Within a few months, everyone was commenting on the sea change. Saddam attended Magic bus sessions regularly and has enrolled in Class 10th through an open school. He is also working in a nearby factory part-time to support of his family.

Saddam has discovered a latent love for football so comes for daily practice with his Magic Bus mentor. In the pic above, Saddam poses at the Magic Bus North Delhi office with his group.

Ten year old Nasir was a school dropout. His friends called him a bully and the Magic Bus volunteer found his behaviour disruptive. He counselled the child and put him back in school in the April 2013 academic calendar, and ever since, he has been monitoring his progress. Nasir has also been given responsibilities and chores to do during the sessions and his progress has been remarkable. He no longer bullies the younger children and has become more responsible.

The sessions are conducted every morning and evening on Thursday, Friday, Saturday and Sunday under Kushmi, the 20 year old Magic Bus employee, and Sabuddin, the local mentor (we call our volunteer mentors Community Youth Leaders).   These are divided into three parts: