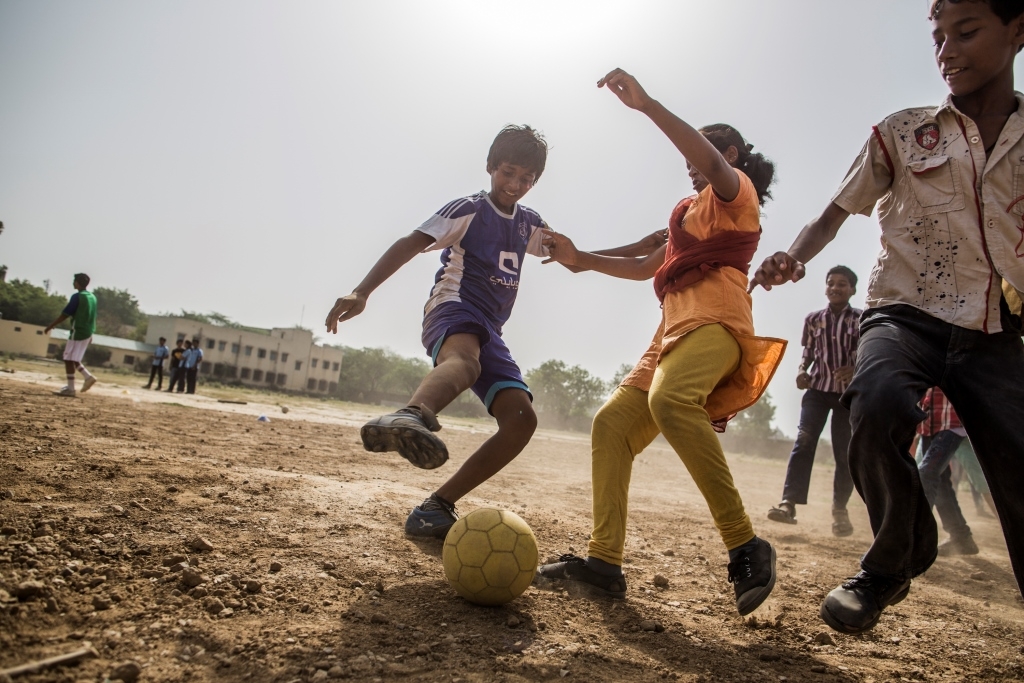 Magic Bus' work in this community is made possible with the support of our donor, Pria Pamnani

Gautam Colony in Narela is an eight-year-old resettlement area located behind the Narela Police Station in North Delhi. Most of the families living here were resettled from slums around South Delhi localities such as Lajpat Nagar and the Yamuna River, as part of the Jawaharlal Nehru National Urban Renewal Mission (JNNURM). [The Jawaharlal Nehru National Urban Renewal Mission (JnNURM) is a massive city-modernisation scheme launched by the Government of India under the Ministry of Urban Development. It envisages a total investment of over $20 billion over seven years.]

When people first started living in Gautam Colony, they could only build shacks from old materials such as tarpaulin sheets. Over the years, families prioritised saving by building rudimentary one- or two-roomed structures. But sanitation facilities remain a daily challenge. Most of the people use the neighbourhood Sulabh Shauchalaya (a paid public toilet facility), while children defecate in the open on the railway tracks nearby.

Clean water is provided for two hours every day through a single pipe that has been installed by the Municipal Corporation of Delhi near the local park to cater to the needs of the 800-odd families living here. The water supply is affected by problems in the pipeline. This creates a serious problem for residents. Like other neighbourhoods around Narela, Gautam Colony too suffers from choked drains that are breeding grounds for mosquitoes.

People living in the area generally hail from the states of Uttar Pradesh, Bihar and Madhya Pradesh. Most work in the factories set up by the Delhi State Industrial and Infrastructural Development Corporation (DSIDC). Extreme poverty has opened the doors to several vices: gambling, alcoholism and drug addiction cause problems for families. It is not uncommon to find women bearing the entire burden of sustaining the entire family.

The Magic Bus programme was launched in this area in January 2012. There are about 250 children in this community, of which 100 are girls. The girls to boys ratio is very low in this community and one of the main concerns here. Twenty two-year-old Lokesh Kumar is the Youth Mentor in charge of the programme. He is assisted by 10 Community Youth Leaders, none of whom are girls, owing to the fact that girls are discouraged from pursuing education. Recruiting girls into the programme in Gautam Nagar is however, a major challenge. Higher education is usually discouraged for girls and most of them are married off by the age of 18.

14-year-old Manoj never liked to play. Instead, he liked disrupting play sessions by engaging in brawls with his peer groups.

He had no friends. He was considered to be loud and aggressive by people in his community.

When Jitender, our CYL in Gautam Colony, met Manoj he convinced the latter to come for the Magic Bus sessions. It took Jitender several days to finally get the recalcitrant Manoj for a Magic Bus session. Manoj was enrolled but he was hardly regular. After several weeks, he started coming to the sessions and participating in the activities. His interest grew with each passing day. Before long, Manoj had completed a month in Magic Bus without even missing a session!

Manoj has transformed into a different person now. He is less aggressive and more interactive. He leads sessions and takes ownership. He has won back respect in his community as well.

Magic Bus regularly organises awareness rallies and parent meetings to tackle this issue of gender equality in the community. Rallies were held in December 2013 regarding the importance of education and educating the girl child.

Initially, the community did not give much importance to education. Girls either weren’t sent to school or dropped out early. A number of children didn’t attend school regularly and worked with their parents instead. After initial reluctance, the community now actively participates in these rallies. There is a noticeable change in the parents’ behaviour too. They now understand the importance of schooling and education and children’s attendance at school has improved considerably. Significantly, there has also been an increase in the number of girls attending school regularly.

The area where Magic Bus sessions are held was extremely unhygienic, so a meeting was held with the community about cleaning up the area. The community readily participated and cleaning drives began. Children also participated enthusiastically.

Football tournaments are regularly organised for children and the youth in order to supplement teaching and to maintain morale.

Community response and participation for these events have gradually increased. A food distribution drive was also conducted recently.

Sessions are held on Wednesdays and Saturdays from 11am to 12.30pm and 4pm to 6.30pm, and are divided into three parts: