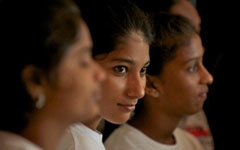 Magic Bus' work in this community is made possible with the support of our donor, Deval Sanghavi.

Saddam colony is a slum cluster at Allagada in the Kurnool district of Andhra Pradesh. Its population stands at 778 persons. Residents speak a mixture of Urdu and Telugu. A majority of them practise Islam. Almost 95 percent of the households in this community lie below the poverty line.

Residents are either involved in vegetable vending or hawking. A few of them are also employed as agricultural labourers. Magic Bus began working in this community since 2011. Despite winning the community’s trust, parents’ have continued to show resistance about the participation of girls in mixed gender sessions. The team has been working on overcoming this resistance through regular awareness meetings on equal rights and opportunities for both boys and girls in the community.

Sessions are held once every week on Sundays between 9.30 and 11.00pm
Magic Bus Sessions here are divided into three broad parts: