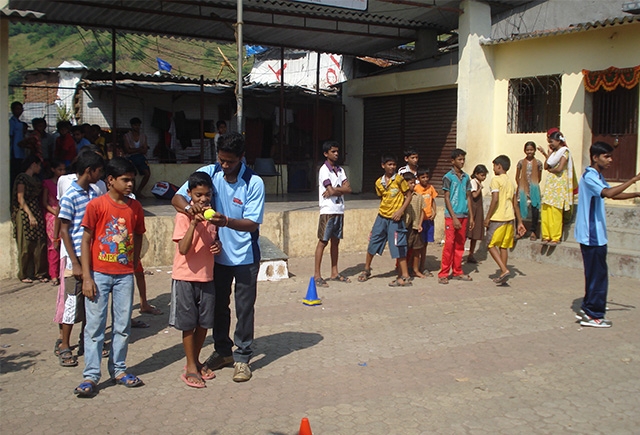 Magic Bus' work in this community is made possible with the support of our donor, Sara Taseer.

The population is around 6,000. People in the community are mostly Muslim and some are migrants from Uttarakhand. The area has pucca houses. Most of the men from this community work as daily-wage labourers, rag-pickers and sweepers. Women work as domestic help and labourers in local factories.

Water supply is provided by the government through tankers. Every house has a toilet and unlike other lower-income communities, Shaitan Chowk has no prevalence of open defecation. The area has a functional drainage system.

Magic Bus started operations in Shaitan Chowk in 2010. The programme covers 534 children of which 213 are girls. Ritu Saharan, 23, is the Training and Monitoring Officer in charge of Shaitan Chowk. She is assisted by a 22-year-old Youth Mentor, Kapil.

A football tournament was organised for children in the community in April 2014.

Fourteen-year-old Nikhil lives with his parents and three siblings in a rented house in Shaitan Chowk, Subhash Vihar. His father works as an ‘office boy’ at a private company and mother is a housewife.

Nikhil used to chew tobacco. He was enrolled in B-1, Yamuna Vihar School, but was irregular in attending classes.

He started attending Magic Bus sessions in 2012. He used to chew tobacco even during sessions and in school. His Youth Mentor Kapil counselled him to stop chewing tobacco. But it didn’t make any difference.

Soon, Nikhil developed an interest in playing football. He was asked to participate in the tournament, but only on the condition that he would stop chewing tobacco.

The Youth Mentor also talked to his father during a parents’ meeting. Soon Nikhil’s family too supported him and helped him quit the bad habit of chewing tobacco. Gradually, Nikhil reduced his tobacco intake and started attending school regularly.

The community has slowly started coping with gender bias in a better way. Earlier, the community didn’t allow their daughters to play, especially if the Community Youth Leader in charge of sessions was male. Boys and girls were hesitant to play together. However, with consistent efforts by Magic Bus, the situation is improving.

In every session, good health and hygiene habits – such as washing hands before meals and bathing every day – are taught to the children. This is bringing about a change in their lifestyles and making them healthier and more hygienic. Parents are also convinced with Magic Bus’ activities and are becoming increasingly aware about the importance of education, good health and gender equity.

Magic Bus sessions are held from Tuesday to Saturday from 9 am to 12 pm, and are divided into three parts: